*Note: This is part of a series of thoughts on the topic of looking at movement and movement related symptoms as influenced by the nervous system. These will be dynamic posts with additional content and references being added as time allows, but the primary purpose of the posts are to share my current thoughts on the influence of manual therapy and exercise on what we see and feel in our patients. I hope others will engage me in these thoughts and provide their perspectives and also criticism into the process.

In part 1, I wanted to provide the definition for post-antalgic patterning which I believe is important to understand before thinking about how we treat it (if it even needs to be treated), for which I lay the ground work here:

A little over a year ago Jason Silvernail released a great video summary on manual therapy and the nervous system called “Crossing the Chasm” which definitely had its intended effect on me. This discussion has been a “hot topic” for at least a decade. As I have attempted to share this same information with other clinicians, I have noted a trend towards wanting more “practical” connection between the techniques we use on a daily basis and the nervous system. As a result, over the last year I have started to formulate a way to bring a little bit of clarity to a very complex topic.

Mechanoreceptors – The elephant in the room

In most of our academic preparatory programs for various rehabilitation disciplines, our afferent and efferent sensory nerve fiber education has focused primarily on severe neurological conditions of the peripheral and central nervous system (stroke, spinal cord injury, CNS disease, etc.). However, when it comes to the role of the nervous system in musculoskeletal conditions, the focus tends to be on nocioception (note of importance: nocioceptors are NOT PAIN RECEPTORS!), chemoreceptors (in particular the relationship to inflammatory mediators), proprioception, muscle spindles, and the golgi tendon reflex. We might touch on some afferents when we talk about gate control, but in general, mechanoreceptors are a very minor part of “most” professional academic programming offerings. This is despite that fact that mechanoreceptors may be one of the bodies most densely dispersed points of interaction with our nervous system, in particularly in the tissues we commonly claim to be treating (joint capsules, fascia, ligaments, muscles, etc.).

I remember vaguely talking about Ruffini Endings, Merkel’s discs, Pacinian and Meisners Corpuscles, but I don’t remember much emphasis on them and I certainly didn’t see any value in even recalling their names at the time. Yet now I realize they are probably some of the most important structures I deal with on a daily basis, in particular when it comes to manual therapy interventions. We get so obsessed with the biomechanical properties of soft tissue and joints and the illusion that we can mechanically alter them through our hands and various tools despite growing evidence that this simply is not the case, or at best, has an extremely small role in the big picture. Yet we choose to ignore, or at the very least downplay, the one basic fundamental pathway, the cascade of neurophysiological events which occur every time skin is compressed. These events can result both in short term and long term tissue and movement quality changes which have the potential to explain every single “change” seen through the use of manual therapy. Furthermore, any inflammatory, fluid dynamics, or thermal responses which potentially could come about from an aggressive intervention could have chemical, thermal, and fluid interactions with mechanoreceptors, chemoreceptors, and thermoreceptors thereby compounding and/or altering an existing externally induced neurological stimulus. If the inflammatory, fluid, or thermal process remains active for hours or days, this could yield a sustained stimulus on mechanoreceptors, thermoreceptors, and chemoreceptors thereby influence the nervous system for an extended period of time (think of a “built-in portal e-stim unit” that already exists in all humans).

Perhaps more important than the external stimulus itself is the ability to modify, enhance, and/or guide the therapeutic outcome of the neurophysiologic response from the stimulus with an educational context provided to the patient, allowing for a profound impact on how they perceive touch and movement.

So what does the pathway for this manual therapy to mechanoreceptor stimulus to tissue quality/movement change look like? Dr. Schleip has perhaps best described this in his work on fascial plasticity, of which this diagram provides perhaps the most concise explanation of the relationship between manual therapy and the nervous system. 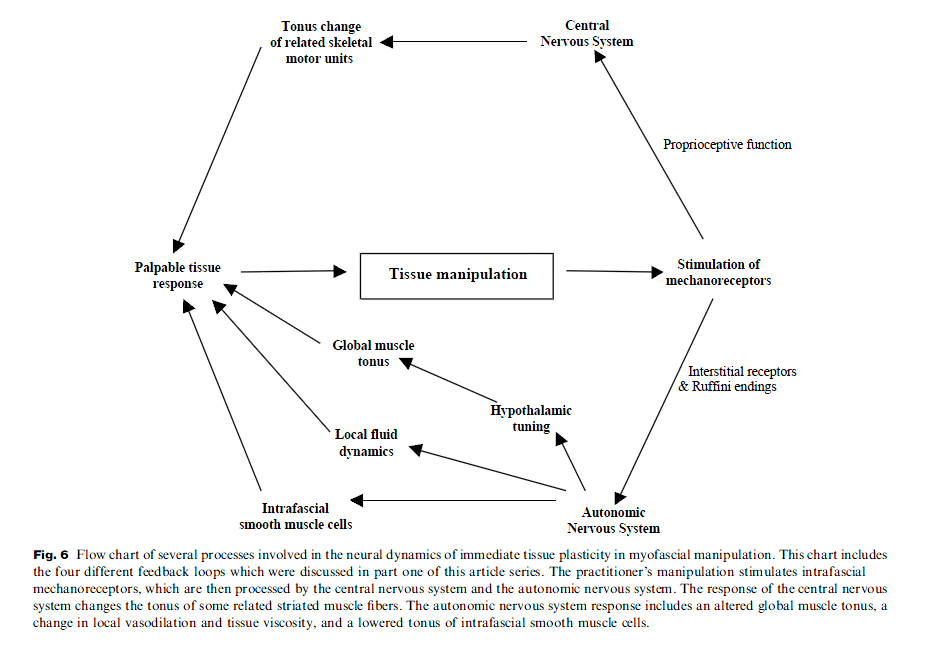 “Free nerve endings do it all”

“Ligamentous Mechanoreceptors – I got nothing”

Last but not least, how can so called “inert” soft tissue, or fascia, have tissue tension or “tonus”? 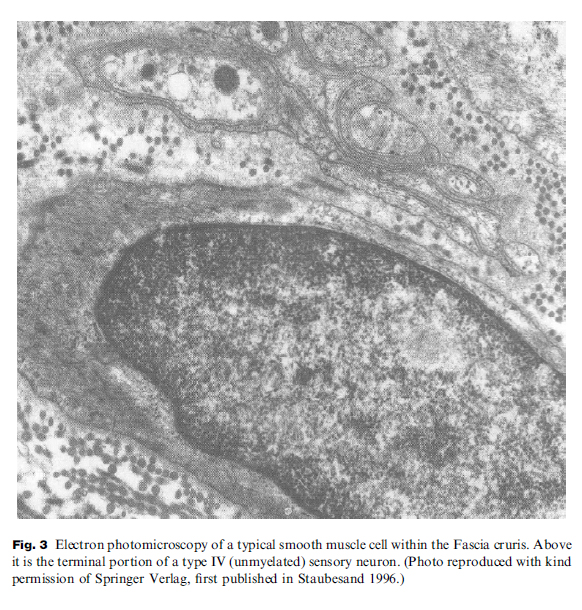 More regarding the existence of smooth muscle cells within fascia can be found here.

To be continued in part 3..

This is part 3, the last of a series of posts reflecting on some highlights in learning about movement that I experienced in this last year. In part 1, I addressed my experience with Applied Functional Science / Chain Reaction™ Biomechanics and presented an application of this approach using hip internal rotation. In part 2, I reflected my current thoughts on strength and conditioning. Now in part 3, I discuss my thoughts behind Fascia, Anatomy Trains, and Regional Interdependence.

Much of what we thought we knew about the biomechanical science of fascia and myofascial release is bunk. By saying this, I need to make it clear in advance that this does not change how we treat, rather it changes how we educate our patients and perhaps makes you think more critically about why you might, or might not, want to treat in a certain way. Greg Lehman provides an excellent review of fascial science on his blog.

So what about Anatomy Trains, which I have previously stated may be a beneficial overview for regional interdependence? As Dr. Lehman discussed, it is extremely unlikely that from a manual therapy standpoint we are making biomechanical changes to tissue. If anything, the biomechanical representation of Anatomy Trains better represents fascial adaptation to function and will only respond to progressive overload with daily stresses and exercise. Furthermore, if we look at function and movement, “Form Follows Function” , then the representation presented by Anatomy Trains may vary individually because tissue adapts to the stresses induced on a daily basis.

So we need to throw out the patterns presented by Thomas Meyers, correct? I personally do not think so. This is not the first time we have developed a general map which is not truly accurate of an individual representation. Our good friend the cortical homunculus also is an inaccurate representation of the somatosensory cortex. 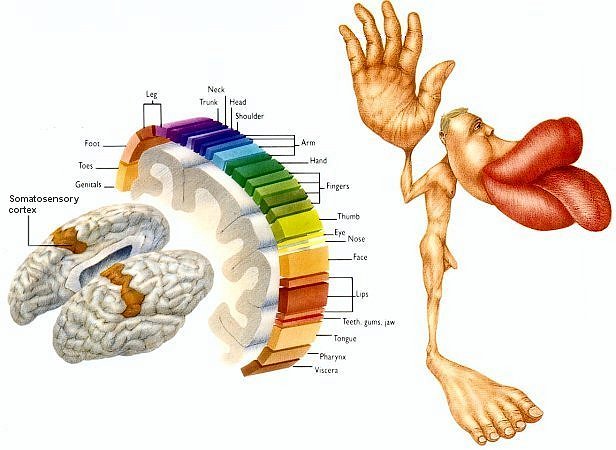 Why? Because the brain is plastic and the somatosensory cortex adapts to how we interact with the world over time, which is most clearly demonstrated by cortical reorganization in phantom limb pain. Yet we still can use the homunculus as a general representation to give us a visual to for understanding sensation. Similarly, I still believe that seeing the patterns in Anatomy Trains can help us better see movement globally and therefore help guide treatment with complex patients representations. From a movement perspective, especially globally, we need to have some way to compartmentalize all the information and how they approximately relate to each other. Joint by joint osteokinematics and arthrokinematics help but can get complex quickly when you combine them with muscles and fascia. Patterns, such as those represented by Anatomy Trains, which encompass both bone and soft tissue, can help compartmentalize and make treatment more efficient if used appropriately. Of course, the reverse is also true, chasing patterns religiously will also take away from the most obvious, efficient, and appropriate treatment approach. Needless to say, these patterns do manifest themselves in our clients and patients from time to time, and to be ignorant of their general representations will cost you and your patient time.

As a side note, we are in a new era of our understanding of pain, with increasing emphasis on a neurophysiological role in this picture. There may be some overlap between the cortical homunculus and fascial adaptation over time. Since fascia is highly innervated with Ruffini and Pacini corpuscles, changes in fascia from physical adaptation to stress and from habituation to particular forms of movement may influence sensory perception and could theoretically be represented in the somatosensory cortex. With some recent evidence regarding the possible existence of a nocioceptive map which overlaps closely with the somatosensory cortex, there is the possibility that sensory rich fascia may be the interface that allows some of our voodoo with regional interdependence to occur, and why sometimes, specificity matters. This is purely hypothetical, but some ground work for the role of fascia and tendon pain (including pain referral) and their related cortical representation  is discussed by Dr. William Gibson (His PhD thesis is available here: Pain sensitivity and referred pain in human tendon, fascia and muscle tissue.) But since we don’t have any other explanation for how manual therapy sometimes requires specificity and sometimes those points of specificity fall in the patterns represented by Anatomy Trains, this is where I am resting my patient education for the time being.

For a better summary than what I wrote above, I highly recommend a post by Alice Sanvito titled:  “If we cannot Stretch Fascia, what are we doing?”.