Most of the time when we deal with an acute inversion ankle sprain, we look at how to manage it for 16-18 hours out of the day and maybe add in some elevation at night if there is significant swelling. But could we do a little more to speed the recovery time or at least decrease the discomfort during the night? If the individual with an ankle sprain sleeps on their back or on their side (if they lay on their stomach, this solution will not work), here is something to try to help mediate some of the acute pain with laying on their back/side with an acute inversion ankle sprain.  This mechanism/solution may seem negligible, but I can assure you that your patient will thank you for at least suggesting this as an option.

Although anatomic variations and pre-existing lack of mobility may prevent this from occurring, but for many, when the leg is rested on a surface, such as in supine with the posterior aspect of the calcaneous in contact with the surface, the effect of gravity naturally places the ankle into a bit of plantarflexion.  With plantarflexion, a concurrent anterior glide of the talus occurs which is slightly accentuated by gravity both on the foot and through the talocalcaneal bridge with the tibula/fibula. This is because the calcaneous acts sort of like a fulcrum in which the talus has a relative anterior glide due to the effect of gravity driving the tibia and fibula gently posteriorly  on the talus towards the resting surface due to size and weight differences. As a result, additional stretching/irritation of the anterior talofibular (ATF) ligament may occur. If the patient rolled on the side which places the injured ankle’s lateral aspect to be faced towards gravity, gravity would then contribute to the foot/ankle invert/adducting and minor stretching/irritation of the calcaneofibular (CF) and ATF ligament. Similarly, having the ankles lateral aspect on the support surface, through bodyweight and lack of conformity of the surface, minor stretching/irritation of the CF/ATF ligament may occur. 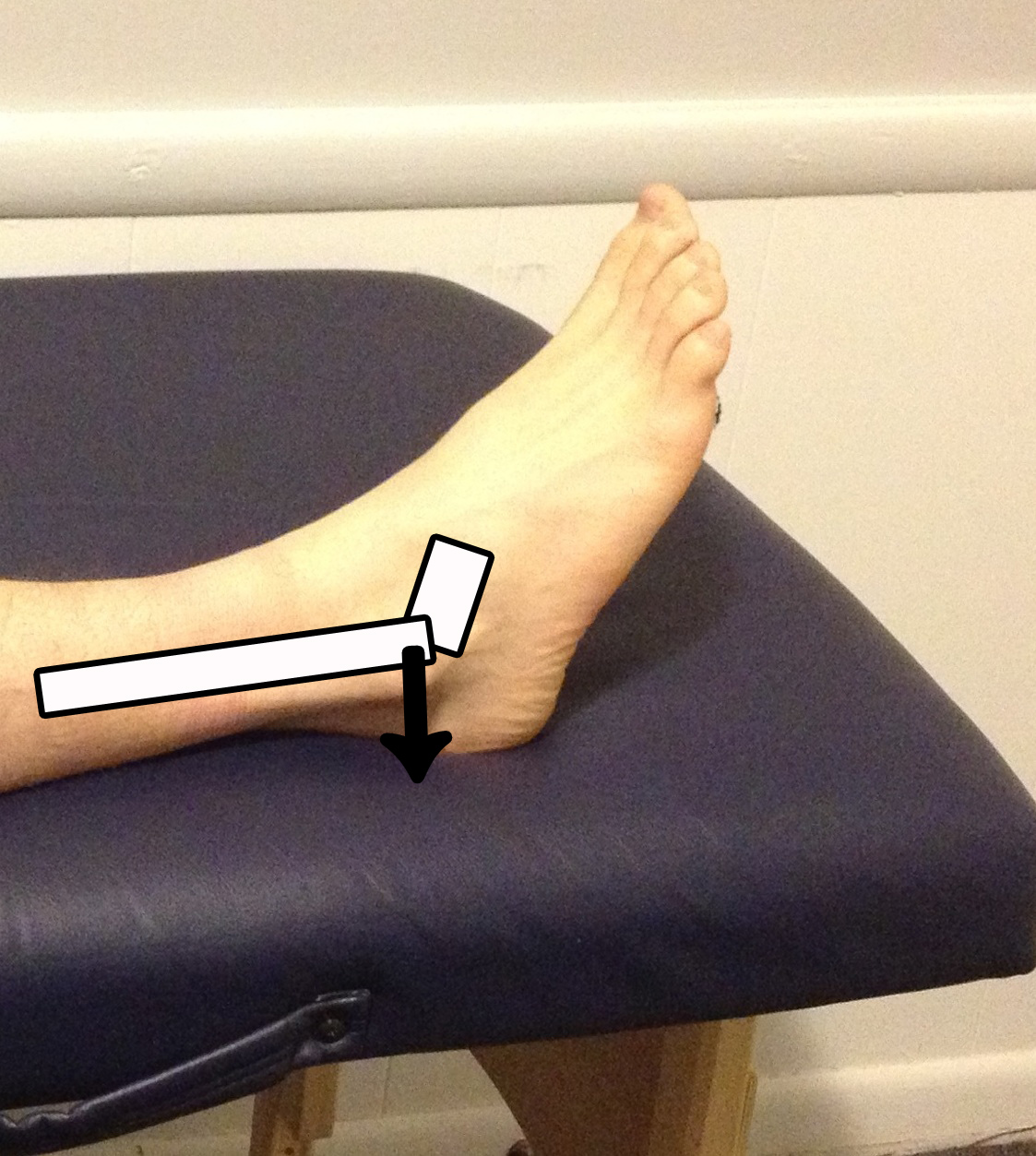 One way to counteract this kind of stretching/irritation is with a conforming pillow, which can assist with preventing the amount of plantarflexion in supine, and inversion, in side lying which may occur while laying in bed/couch, etc. But a pillow can be more cumbersome and require a fair amount of adjusting throughout the night to accommodate.  Another way is through a small homemade/athletic training room/clinic made supportive device:

Take a simple piece of foam tubing (IE: pipe insulation tubing or thin floatation device) cut it to a length that can cover the back of the ankle and both malleoli. Thread a piece of string through it to allow it to be fastened around the ankle. Tie the string tight enough to allow it to stay on the ankle above the calcaneous at the talotibiofibular joint, but loose enough to easily remove.

This foam supportive device provides support at the talotibiofibular joint which, in supine, reduces the influence of the posterior glide of the tibia/fibula on the calcaneous (reduced relative anterior glide of talus) and also mildly dorsiflexes the ankle. In side lying, it can be positioned more inferiorly to prevents inversion/adduction with the lateral aspect facing to the sky, and left at the talotibiofibular joint line when the lateral aspect of the ankle is facing the resting surface. Basically, we are trying to prevent additional stretching of the soft tissues associated with anterior glide of talus. 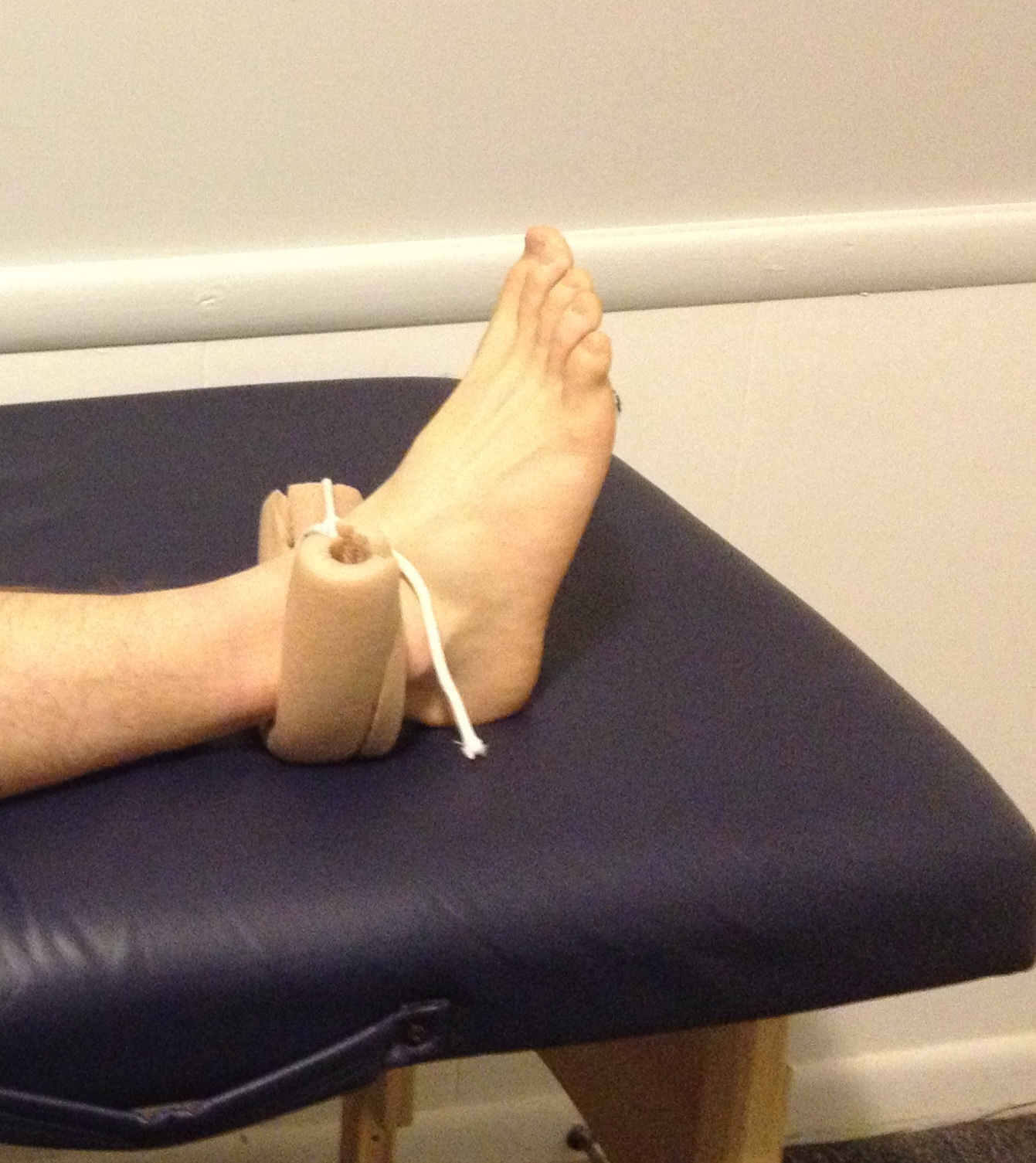 In theory, this may secondarily assist with healing, as it helps keep the ATF,CTF, the capsule, and other tissues in an approximated position. This may be beneficial after aggressive posterior talus mobilization/manipulation as well.

…Ofcourse, everything I just described above could be complete hocum and simply the additional sensory contact around the ankle could act like a counter-irritant. Regardless, speaking from experience, it just feels better.

Interval Based Dynamic Warm-ups Moving Beyond the “Rest” of RICE in Acute Inversion Ankle Sprai...
Scroll to top