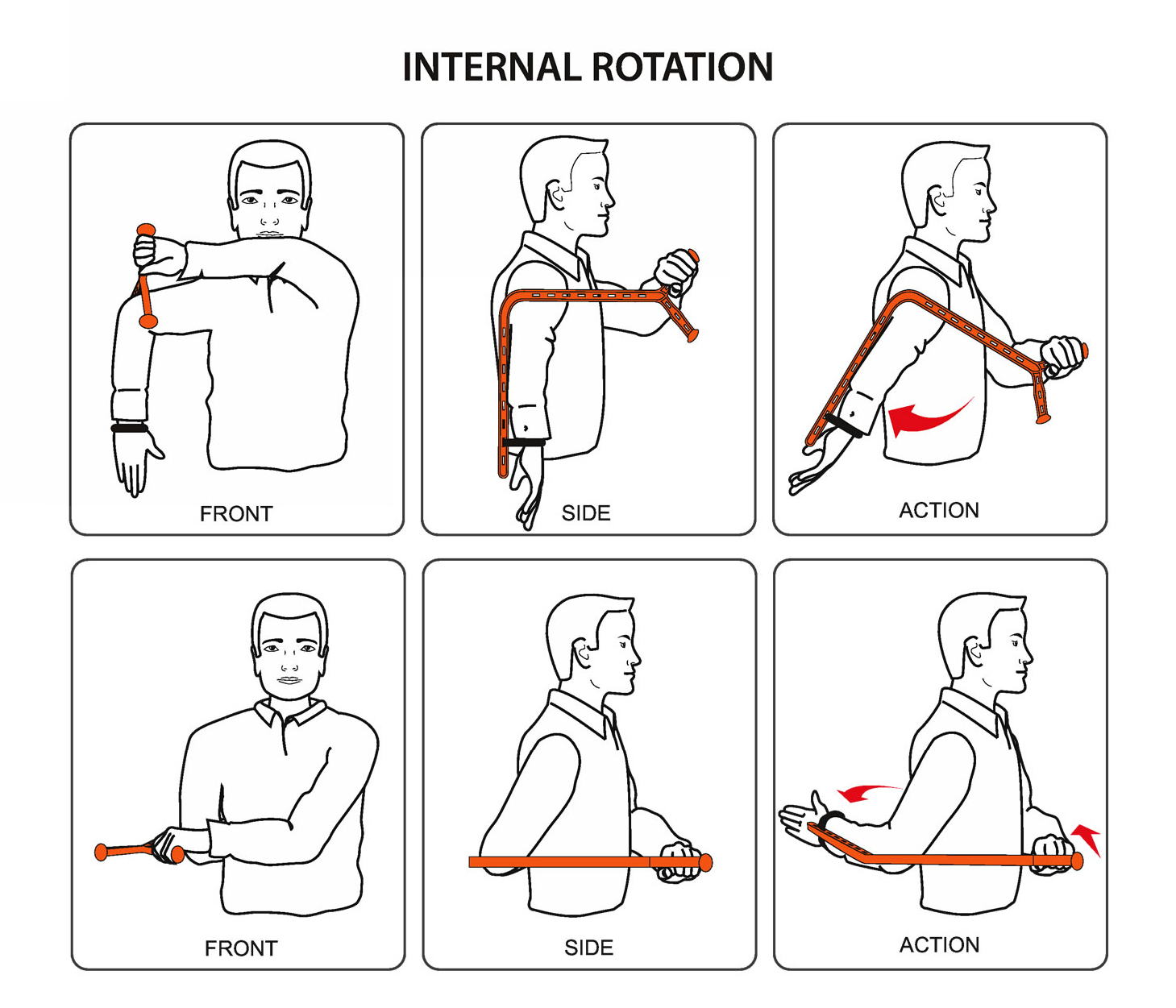 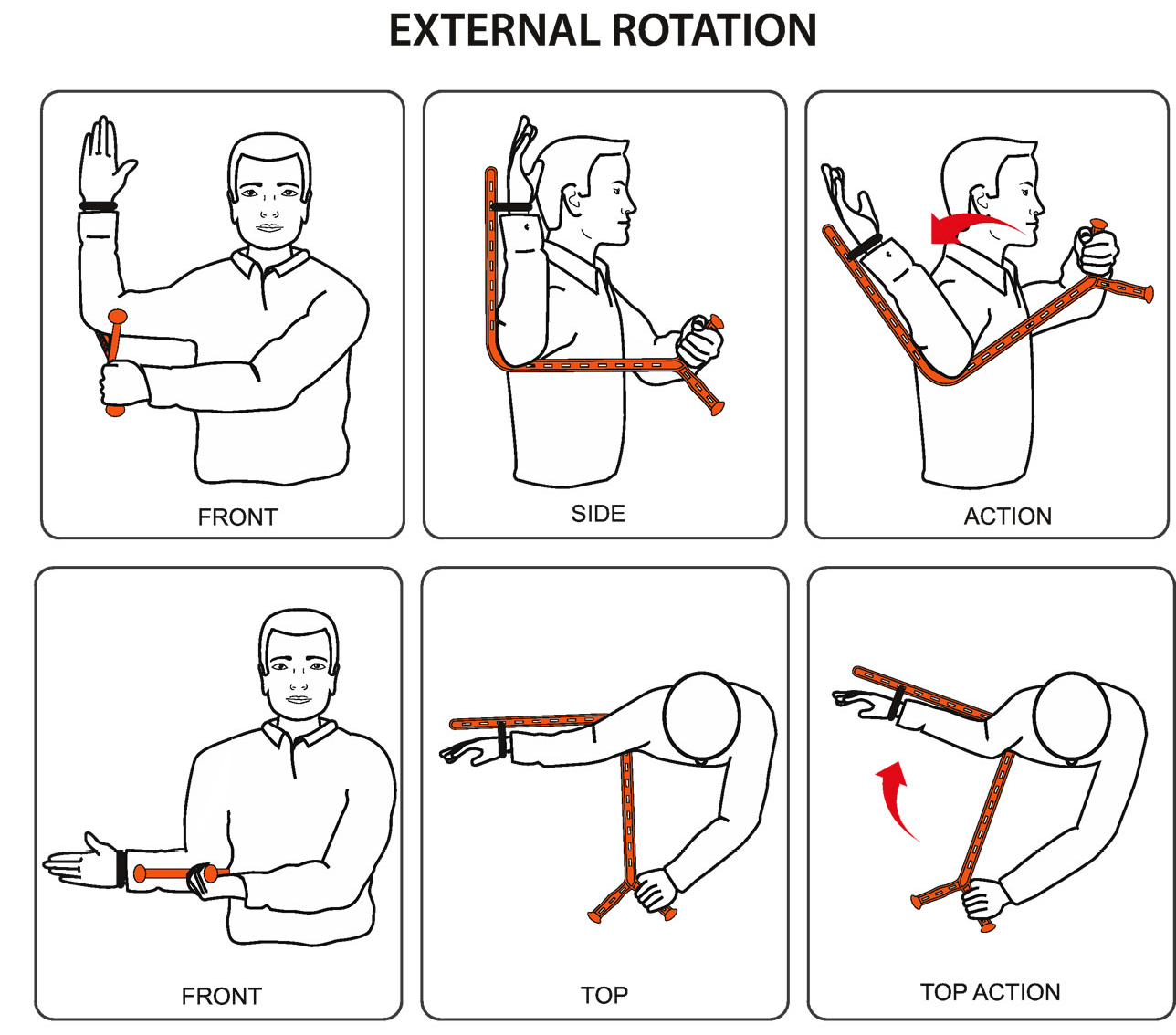 Chris Melton from Joint Mechanix sent me a free trial of the Rotater back in March. When I first received it, there were a few minutes of blank staring at it trying to figure out which way to hold the Rotater to get it to do what I wanted at the moment. When I finally watched the DVD that was enclosed, I had to smirk when Eric Beard also became confused on which way to hold it in the outtakes. Needless to say, like with anything I review, I took my time to play with it for a while before I make too many comments on it. In addition, because I have a bit of excess ROM in both internal and external rotation, I really did not use the rotator much myself. Instead, I had a few individuals with restrictions try it out and merged their thoughts with what I observed while they were using it. So here is the review:

As is usually the case with anything I touch, I tried to turn the Rotater into something other than it was designed to do. I wanted a lot of stretching and strengthening variations, but that is not the point of the Rotater. The Rotater is what it is. Which is not to say that is bad in any way, it is the best at what it is designed for, which is for self controlled stretching into focused internal and external rotation. This is a good thing, because as has been mentioned before, the greatest part of the Rotater really is the ability of the patient to control the stretch themselves. I have never been a fan of assisted stretching, but IR and ER stretching is difficult to do independently, typically requiring assistance. However, this can be risky, as I have seen partner assisted shoulder stretching sessions resulting in strains and even tears. The Rotater design solves that problem by putting the control back into the hands of the individual themselves, making it great for post-op shoulder surgery, pitchers/throwers, and any individual lacking IR and/or ER. The design also allows IR/ER to be stretched in nearly all ranges of shoulder flexion and abduction which can help with designing functional ROM progressions within post-op restrictions. The Velcro band can also be used as a gentle resistance point for self-administering PNF stretches or even oscillating stretches at the end range if the need arises.

I want to clearly state, that when it comes to addressing limitations of ROM, I still believe the first goal should still be address joint mobility of the effected joint and those around it to see if the ROM limitation clears up without more focused stretching. If it does not, there is still an important place for additional stretching, and in the case of lacking IR/ER in the shoulder, the Rotater really shines in this area!

So what were my concerns and dislikes? At first, I was concerned about the durability of the Rotater, but the reality is it survived a couple of incidences of being stepped on, thrown and dropped, and aggressively being flexed. I thought the amount of flex that occurred with stretching and the strong arm would eventually give and snap it in half, but it has held well and Chris stated the flex was actually there by design for durability. Regardless, they warrant the Rotator all the way around, so if anything were to break they would replace it.

One specific dislike I had was mostly to do with my own personal preferences. I just do not do very much focused IR/ER strengthening with most of the people I work with. So for me I was not entirely sold on the strong arm attachment. It worked as it was intended, but it was time consuming to switch between IR/ER. If an individual needed a very specific range to be worked with tremendous control and only in one direction, it could work well. However, I tend to do more stabilization, eccentric control,  and multi-joint/multi-planar exercises for the shoulder. Although you could use it for controlled stabilization and eccentric control, I prefer getting the entire shoulder involved using another method.

Overall, the beauty of the Rotater is in its simplicity, it does its intended job very well. I commend the team over at Joint Mechanix for putting the Rotator together without an orthopedic rehab background!

Regional Interdependence: The “Off Label” Treatment Random Tip of the Day: The “Finicky” Rib Torsion
Scroll to top