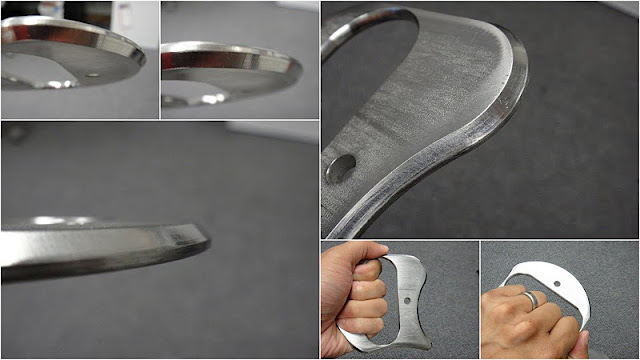 ***FULL DISCLOSURE: I am planning on becoming an affiliate for the EDGE. I hope this review stands for itself that monetary reasons have no influence on my perspective or this review, but I wanted to be upfront about my future intentions.

I have been following Dr. E’s Blog off and on for the last year, primarily for the excellent education resource it provides for those with strong interests in manual therapy. I had looked at the EDGE tool a number of times, but never really thought seriously about trying it out because I’ve always had a bias towards the exclusive use of my hands in manual therapy. The whole Graston/ASTYM and the  Instrument Assisted Soft Tissue Mobilization (IASTM) seemed like a fad to me, so I thought I’d wait it out.  However, in January, I mentioned Dr. E in a Twitter reference and was surprised to hear back from the man himself.  We spoke off and on since then, and he mentioned he wanted to get my thoughts on the EDGE as a self-treatment tool for the martial artist. It took me a while, because I was still skeptical, but I finally ordered my own EDGE at the end of February to try it out.  I quickly found out, I really couldn’t do it justice by only speaking from the perspective of a martial artist, but also someone who is completely new to the concept of IASTM and how different it is from traditional soft tissue mobilization (STM).

To start,  I wanted to talk about how oblivious I was to the difference between IASTM and STM. I was fortunate enough to have some great physical therapy mentors introduce me to STM in 2003, prior to even starting school for athletic training or physical therapy. Over time, I began to favor a treatment approach that was biased towards combinations of ischemic pressure based releases and blunt (finger) deep cross friction. This treatment style did not transition well into IASTM , which I believe fits better within  the realm of differentiating and treating based on “dysfunctions” in myofascial tissue layers. I have been historically biased against popular myofascial release techniques because I do not see as rapid of a change as I do when I deal directly with hypertonicity in contractile tissue (trigger points, etc.). In my attempts to transition the EDGE over to this style of treatment, I was frustrated in overlapping these techniques because of the abrasions and skin pinching that resulted from attempting to use the tool in this manner. Over the first few weeks, I was able to get a few individuals willing to subject themselves as gracious guinea pigs for me test the EDGE on, including myself. Our first impressions were that we were uncomfortable with the “abrasive feeling” in comparison to the way I had been treating before, in particular the residual burning skin (not bruising) discomfort for the day following. I also became concerned with some of my deeper treatments possibly breaking the skin because I made that mistake on myself in my first treatment session. I nearly gave up on IASTM two weeks into it because I simply was ignorant to the purpose of it. I decided to step away from the drawing board and started reviewing the EDGE basics videos and a number of ASTYM videos. With paused reflection, I realized I had to come to IASTM with an open mind towards learning a new style of treatment rather than forcing my own idea of how to use it.

The next time I picked up the EDGE, I started working on an old achilles issue of mine and really spent time working superficially before progressing to deeper layers, and this time I actually made a change in the symptoms and the tissue, very quickly. The strokes were now intent on stripping and scraping in a layer approach rather ignoring the superficial layers and going straight for the deep tissue. An e-mail communication with Dr. E. at that point confirmed to me that my early attempts were really rather futile and that the emphasis of IASTM is stripping and scraping technique in order to facilitate the inflammatory process in healing.  Now, six weeks later, not only am I am able to use the stripping and scraping techniques in a manner which is resulting in symptom reduction but I have also slowly been able to adapt my ischemic pressure releases into the EDGE and reduce the dependency of my hands for all my STM treatments.

From my limited experience so far, I can say that the EDGE certainly is not for every condition and does not work well for everyone (I have one volunteer I definitely cannot use it on), but it has found an important place in my developing manual therapy skill set. Nevertheless, the EDGE has dramatically changed the way I think about treating soft tissue dysfunction and I am thankful that I have had the opportunity to start developing IASTM skillset prior to my full time practice as a physical therapist in manual therapy.

One thing that I wanted to comment on was the type of lubricant/medium used as an interface for IASTM.  After a week of trying out Albolene, Dr. E’s favorite medium for IASTM, I switched to Cramer Skin Lube. I was introduced to Skin Lube during one of my clinical rotations in athletic training where we did an extensive amount of STM using a medium (new to me, since again, I didn’t use “massage like” techniques at this point) on track and field athletes. Skin Lube has a much higher melting point, was cheaper than Cocoa Butter which is commonly used in “massage like” techniques. It is odorless similar to Albolene and seems to last longer than Cocoa Butter and Albolene. For me personally, it felt as though I need a significant amount of Albolene before I felt like it was providing a protective layer against excessive early skin abrasion and I felt at times I needed to re-apply it. With Skin Lube, it took only a single application for roughly 1/4th of the amount of medium. Price wise, both products are nearly equal costs on Amazon.com, Skin Lube just barely came in cheaper, 454 grams for $13.41 vs  $13.37 for 340 grams of Albolene. I’m still way new to this whole IASTM thing, but I have to say that my initial experience is that I like the protective feeling of the skin it gives me, but the downside is that it takes quite a bit more work to remove the remaining product in comparison to Albolene. Although perhaps that could be a benefit!

The EDGE for Martial Artists as a self-treatment/preventative tool

Chronic injuries in martial artists are similar to many other sports, although I will highlight a couple of areas I have found the EDGE to be particularly useful.  Hundreds of thousands of hours and repetitions of striking, gripping, pulling, pushing, and chin na/joint locking lends to numerous opportunities to develop overuse injuries in the forearms and hands. The contours of the EDGE are perfectly designed to reach these areas and could possibly play a valuable preventative and treatment intervention for the martial artist’s hands and forearms. Similarly, as martial artists, we are highly susceptible to patellofemoral pain syndromes(PFPS), achilles tendinosis, chronic hamstring, and IT band issues. These areas are also easily accessible with the diverse contours of the EDGE for self-preventative maintenance. Specifically, I found it very effective in addressing problems around tendinous insertions.  I have been able to completely calm down some irritation in my achilles tendon insertion with a single 5 minute session IASTM session allowing me to train pain free for that day. I also had a recent flare-up of PFPS which I have been able to manage symptomatic with a quick session with the EDGE.

When I spoke to Dr. E originally, I mentioned I typically just recommend foam rollers and tennis balls for self-treatment, I was not sure how valuable this tool is going to be to the martial artist. Now 6 weeks into it, I believe I have found a definitive place for the EDGE in self-treatment of areas I didn’t think about treating because I couldn’t really address them with a tennis ball or foam roller.

I would make only one cautionary statement. Our natural instinct as martial artists (and most athletes) is that more is better (“More Chi Train Harder!”), which may make us use the tool more aggressively than it should be utilized, especially if we are used to deep tissue work such as releasing trigger points. I should have known this myself, but my first self-treatment session with the EDGE I actually kept working through the abrasive sensation to the point broke open some skin while I stopped looking at the treatment site. Clearly it’s the users fault, but it was the first time I had to think a intently about being less aggressive and layering my treatment as to avoid making the same mistake. I think with a little instruction and practice, this would be valuable addition to the martial artist’s preventative maintenance program.

“BONUS”: Here is a video clip of a movement based technique I have been using for symptom management of some PFPS that started flaring up for me a few weeks ago. As an update to what I said on the video, not sure if it is coincidence, chance, spontaneous healing, a recent increase in training intensity, or the daily EDGE treatment technique I show here, but my PFPS is pretty much 90% resolved in the last week after only using this technique. Which is surprising to me because I usually have to think more critically about how I was going to treat it “properly” in order for it to get better. Anyway, check it out: