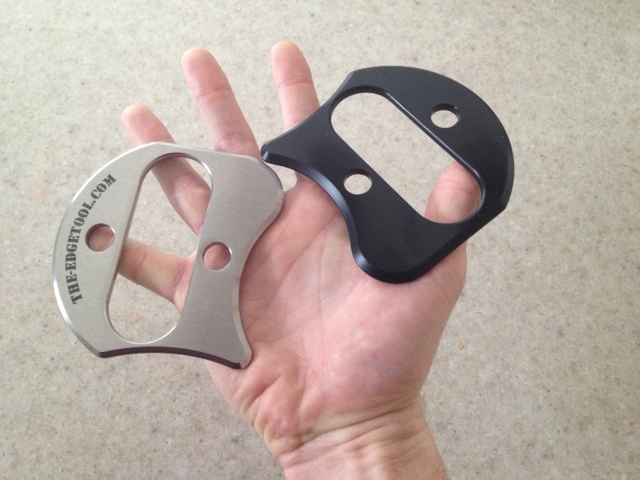 As indicated in my review of the EDGE series of tools and the fact that I am a re-seller of the EDGE (my disclaimer), I am a huge advocate of Instrument Assisted Soft Tissue Mobilization (IASTM) in terms of providing a different neurophysiological input in comparison to using your hands and reducing the amount of stress you place on your hands with soft tissue treatment techniques. I have found that with practice I can accomplish similar within session changes in ROM, strength, and symptoms as other manual techniques. At the same time, I question the rational of using tools to promote tissue healing and to break down scar tissue. I believe this approach has promoted far too aggressive treatment in the past, and at this time, we really do not have great evidence to support this philosophy of treatment. I hope this post provides some insight into why I have this concern.

What is the evidence for IASTM use?

While I believe IASTM to be a valuable tool in my rehabilitation arsenal with its own indications and limitations of use, there are some who have purported tools as being downright magical in their abilities to “heal” patients. Some major brands claim 80-100% success rates for nearly every musculoskeletal condition under the sun, but record and maintain these records privately, available on request only. From the published experimental study realm, far less data is available.

Only two other experimental studies have examined IASTM as an intervention. Burke, et al. (2) compared IASTM to soft tissue mobilization with hands on carpal tunnel syndrome and found that both were equivocal to each other. Blanchette et al. (3) compared IASTM to education, ergonomics, and stretching on lateral epicondylitis, IASTM by itself was found to have no greater or earlier improvements than the control.

Numerous level 2 evidence case reports and case series studies that examined IASTM have demonstrated favorable outcomes in isolation and after other interventions had failed.(4-9) However, as is the nature of these studies, they provide no insight on the mechanism or whether another intervention may have been just as beneficial.

From my personal perspective, I am not looking for magic and I have no concern whether outcomes using a tool may be equivocal to my hands or other interventions(2,3), because at the very least I know it does have a therapeutic effect. This now assures me that I can give my hands a break from time to time and be more willing to experiment a variety of patients using the stimulus of the tool as option, potentially identifying an individual who may be more positively responsive to the tool than you had previously assumed.

Can IASTM help with tissue healing?

Two of the largest names in IASTM make numerous claims regarding the tissue healing and “regenerating” ability of their IASTM tools and techniques. They both have webpages which claim amazing research evidence for their philosophy of treatment. Sadly, little of this “evidence” is available for public consumption. A quick glance at this list shows that only 3 studies on rats provide any insight on the role of IASTM in tissue healing. I will separate many of the popular claims of tissue healing into 3 categories to review the literature: Activate the histamine response and increase local inflammatory response, break down scar tissue and/or re-arrange some nondescript “fibers”, and increasing fibroblasts to the region.

Oddly, although erythema is the most obvious effect noted clinically with IASTM, this is not something that is well studied. I have only been able to find one study which utilized Gua Sha to examine micro circulation. (10) The comparison of Gua Sha to IASTM is difficult to make because Gua Sha is significantly more aggressive than most forms of contemporary IASTM.  Gua literally translates “to scrape or scratch” and Sha can best be described as “red, raised,millet-size rash”. As shown below, it is extremely traumatic looking: 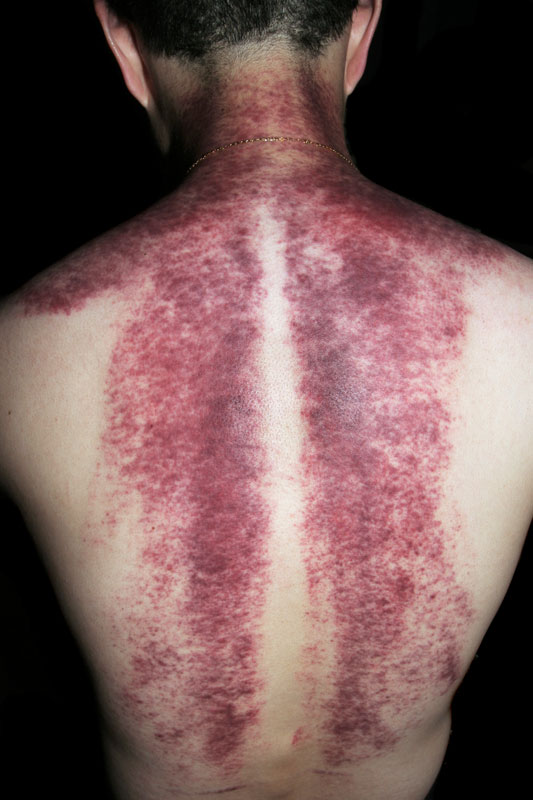 I personally would never want to do anything like this one of my patients. With that in mind, the results of the study demonstrate that, shockingly, yes local superficial circulation is increased when you scrape the tissue.  However, this was after 7.5 minutes of aggressive treatment, which is far more than the average IASTM protocol. Furthermore, the circulation increases were noted as superficial, which questions the ability to infer increased nutrient delivery to, or removal of waste from, deeper muscle, tendon, or other soft tissue.

On a side note to those of us that are neurophysiologically minded, this study also examined Gua Sha’s effect on decreasing pain. After treatment, decreased pain was not only noted locally and regionally but also in  areas far distal from the treatment region. This finding made the authors themselves question the relevance of increasing local circulation for the purpose of pain relief. But I digress…

So what about the idea of breaking down scar tissue or realigning fibers? Loghman and Warden examined IASTM on experimentally induced MCL injuries in rats. (11) They did not specifically address the soft tissue breakdown or “fiber realignment” but did note that “There were no grossly observable differences between ‘IASTM’ treated and non-treated ligaments at either 4 or 12 weeks post-injury; however, non-treated ligaments often had more adhesions and granular tissue, and were more difficult to harvest than IASTM-treated ligaments.” which to date is the only experimental discussion of tissue adhesions related to IASTM.

I will note that Dr. E has reported that a colleague of his is completing a ultrasound imaging study which notes changes in the fiber quality after 2-3 minutes of IASTM treatment. Since this study is still being prepared for publication, at this time I have not been able to review the results.

This is one area I would love to see evidence for tissue change, and I believe there is a “slim chance” for us to scrape “adhesions” surrounding superficial paratendons and tendon insertions around our distal extremities (ie: achilles tendon and insertion).  However, it is important to keep in mind that when we feel the “grittiness” or “adhesions” under our tools, we really don’t know what we are feeling. We cannot say with certainty that it is scar tissue we are feeling. We forget that way back in the day during cadaver dissection we used to see a lot of fatty tissue and non-deformable soft tissue adhesions subcutaneously which could easily explain what we are feeling. Further more, often times after several sessions of treatment, these “adhesions” rarely change, only the tissue tension and tonicity we originally aimed for changes. BUT, there are times that these “adhesions” do disappear after treatment, and I would like to know more about that.

Despite all this, I will not deny that secretly in the back of my head I would love to believe that me scraping paratendon sheaths is breaking up longitudinal “scar tissue” (type III collagen) and promoting movement of the sheath and therefore the tendon, but I recognize simple muscle activation and movement probably breaks up as much “scar tissue” as anything I am trying to do to the tendon with the IASTM tool.

And that’s it, that is all we know regarding tissue healing and regeneration related to IASTM. From evidence in rats only, we can promote fibroblast proliferation, but even in the rat studies, when compared to tissue healing without IASTM, no difference is noted after 12 weeks of healing.

Personally, I do not think the tissue healing concepts will pan out any better in future research, nor do I care if it does or not. It is too easy to fall into the “tissue quality” trap, where we chase the make-believe picture of “good quality tissue”, rather than looking at objective measures which are rapidly changeable to meet the patient’s functional goals. As with any manual therapy intervention, I am primarily interested in within and between session improvements which allow me to promote movement to get the patient moving which is ultimately the only thing that will change tissue. If IASTM helps tissue healing, it’s a bonus, but I do not want it to be focus of my treatment or my education.

I want to end this post with reference to a recent study by Alfredson, et al. which examined the most extreme version of tissue scraping, surgical scraping under anesthetic, in the treatment of chronic achilles tendinopathy. (14) In their study, they recruited only individuals with bilateral chronic achilles tendinopathy, and surgical scraping was only performed on one side (the most painful side). Despite having expected to need a second surgery for the opposite side, 11 of the 13 patients had full resolution of symptoms bilaterally after unilateral scraping. Many already had full satisfaction bilaterally within the first 6 weeks. The authors make a good discussion why they believe these improvements were centrally mediated, not mechanically oriented. It is an excellent read and well worth the time locating.

With the understanding that many of the systems out there have little published evidence for the unique benefits of their expensive educational programs that they require you to complete in order for you to be able to purchase their IASTM tools. Why not consider one of the lowest cost options on the market with the best ergonomics, inclusion of all the most popular concavities and convexities (multiple tools in one), and no entry level requirements available in both stainless steel and plastic? Check out the EDGE and EDGEility series of tools!

10.) Nielsen, Arya, et al. 2007. The Effect of Gua Sha Treatment on the Microcirculation of Surface Tissue: A Pilot Study in Healthy Subjects. EXPLORE: The Journal of Science and Healing. 3(5):456-466.